Today, I explored the bleeding edge of open source and mobile, to see what might be normal in 5+ years. 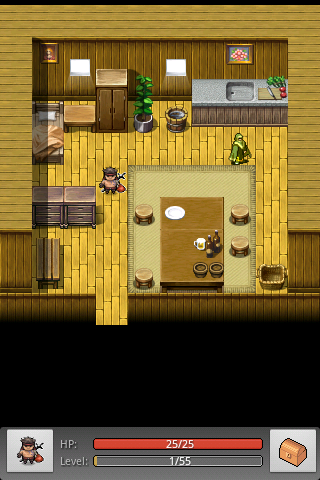 The open-source Android application Andor’s Trail is a top-down role-playing game, sort of like Colossal Cave or Zork with pictures (for my fellow old-timers). I tried it out on my Nexus 7 tablet and enjoyed it — the story line isn’t finished yet, but over two years, the community has built a strong and engaging game. But that’s not the point of this post (we already know how open source works).

This morning, I was in a coffee shop with just my phone, and decided to do the following:

Building open-source apps didn’t used to be this easy. In Linux, you generally install a long list of library dependencies first, then run some kind of configuration, then do a make, figure out what went wrong/is missing, do another make, go on a mailing list to find out what went wrong, download a different version of some of the build tools or libraries, try again, etc. until eventually (maybe a few hours or days later) you raise your arms in triumph and shout that you’ve succeeded in building the app. After that, you’ve earned the right to be smug on mailing lists and tell the noobs to RTFM when they have the same problems you did.

Is this a glimpse at the future of open source? Cloning, building, and installing a dev build (7.1dev) was so easy that a non-developer could do it; on the difficulty scale, I’d say that it’s easier than figuring out how to upload a video or picture to Facebook.

Right now — despite the fact that Android itself is released under the Apache 2.0 license — open source in the mobile world is still in its infancy. We do have the F-Droid app store for Android, stocking only open-source apps. However, what if mobile itself became the predominant open-source development platform, with new types of tools, collaboration, and social cultures? Keep your eyes on this one.