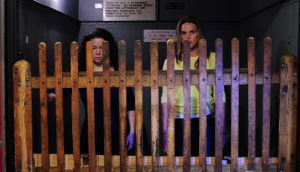 After making one mockup of the home page, we realized that it would take three clicks for a user simply to start watching this week’s episode:

For a web series, where the main point is to let people watch a new episode every week, this made no sense. We thought about a couple of options:

The first option still required two clicks. The second option had more subtle problems: let’s say that I went to sweettartstakeaway.com, watched the current episode, liked it, and sent you the link. Two days later, you open your email, click on the link, and see an entirely different episode, because the current episode has changed.

This isn’t a merely abstract problem. Blogging sites (like those based on WordPress) typically put copies of the newest content on the home page. I have followed hundreds of links to blog postings over the past few years, only to find that someone had linked to the blog’s home page instead of the specific blog posting, and the posting I wanted had long fallen off the home page. Even search engine results do that sometimes.

The solution we finally came up with seems simple only in retrospect — throw out the home page.

When you direct your browser to sweettartstakeaway.com, instead of yawning at a promotional page telling you how wonderful the web site is, you get redirected automatically to the current episode page (on February 14, 2011, that was /episodes/01). Next Monday, you’ll be redirected to a different episode, and so on, for all 18 episodes. (We’re using a 307 redirect, for anyone who cares about HTTP status codes.)

Give them what they want, not what you want

With a web series, you know there’s one activity most visitors care about: watching this week’s episode. When you do know that, why not let them start there, instead of forcing them to crawl through an ego-driven “home page” telling them how wonderful you are?

When the series is finished, and we archive it, we may add a home page then to give historical context for the whole series, with links to episodes. For now, though, it will be interesting to see how our zero-home experiment works out.

1 Response to The zero-home experiment